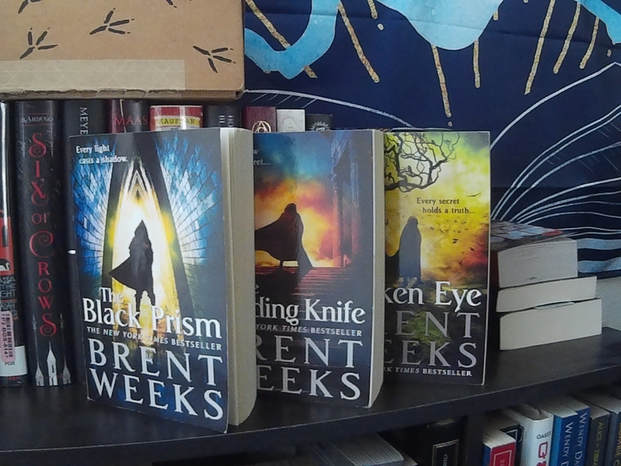 The Black Prism:
"Gavin Guile is the Prism, the most powerful man in the world. He is high priest and emperor, a man whose power, wit, and charm are all that preserves a tenuous peace. But Prisms never last, and Guile knows exactly how long he has left to live: Five years to achieve five impossible goals.
But when Guile discovers he has a son, born in a far kingdom after the war that put him in power, he must decide how much he's willing to pay to protect a secret that could tear his world apart."

The Blinding Knife:
"Gavin Guile is dying.
He’d thought he had five years left—now he has less than one. With fifty thousand refugees, a bastard son, and an ex-fiancée who may have learned his darkest secret, Gavin has problems on every side. All magic in the world is running wild and threatens to destroy the Seven Satrapies.
Worst of all, the old gods are being reborn, and their army of color wights is unstoppable. The only salvation may be the brother whose freedom and life Gavin stole sixteen years ago."

The Broken Eye:
"As the old gods awaken and satrapies splinter, the Chromeria races to find the only man who can still end a civil war before it engulfs the known world. But Gavin Guile has been captured by an old enemy and enslaved on a pirate galley. Worse still, Gavin has lost more than his powers as Prism--he can't use magic at all.
Without the protection of his father, Kip Guile will face a master of shadows as his grandfather moves to choose a new Prism and put himself in power. With Teia and Karris, Kip will have to use all his wits to survive a secret war between noble houses, religious factions, rebels, and an ascendant order of hidden assassins called The Broken Eye."

Interested in the series?
The Black Prism
The Blinding Knife
The Broken Eye

(The series has been extended to a 5-book, rather than a trilogy, but I only own the original three.)

How to Stop Time by Matt Haig 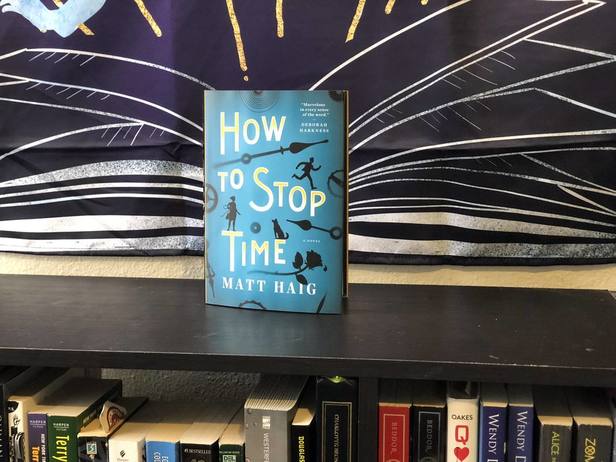 "Tom Hazard has a dangerous secret. He may look like an ordinary 41-year-old, but owing to a rare condition, he's been alive for centuries. Tom has lived history--performing with Shakespeare, exploring the high seas with Captain Cook, and sharing cocktails with Fitzgerald. Now, he just wants an ordinary life.
So Tom moves back his to London, his old home, to become a high school history teacher--the perfect job for someone who has witnessed the city's history first hand. Better yet, a captivating French teacher at his school seems fascinated by him. But the Albatross Society, the secretive group which protects people like Tom, has one rule: Never fall in love. As painful memories of his past and the erratic behavior of the Society's watchful leader threaten to derail his new life and romance, the one thing he can't have just happens to be the one thing that might save him. Tom will have to decide once and for all whether to remain stuck in the past, or finally begin living in the present.
How to Stop Time tells a love story across the ages - and for the ages - about a man lost in time, the woman who could save him, and the lifetimes it can take to learn how to live. It is a bighearted, wildly original novel about losing and finding yourself, the inevitability of change, and how with enough time to learn, we just might find happiness." 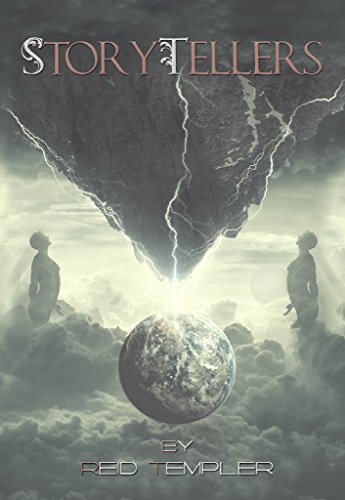 "The Storytellers have endured an eternity of infertility. As gods and goddesses, the only way they’ve been able to create life is by forming their own universes. Pokeetle, busy working on his newest solar system, is stunned when his lover, Madeline, visits and announces that she is pregnant. The new life pulses strongly inside of her, and they are thrilled by this unexpected miracle.
When they tell the other Storytellers about their good fortune, they’re shocked to learn that many other goddesses have also conceived. Pokeetle and Madeline decide to marry and are soon blessed with a daughter, Hannah. But new life comes at a price. The birth of a new generation of Storytellers has rendered their parents mortal and powerless.
While some Storytellers think the lives of their children are worth the sacrifice, others are convinced the newborns must be eradicated. Varick, the king, decrees that the Storytellers must remain mortal—as it would be an abomination to destroy their own descendants. But not everyone agrees, and war breaks out. Pokeetle and Madeline dearly want to protect their daughter—but will they persist if it means turning against their former friends and allies?"
Interested? Pick up a copy today!
​Storytellers